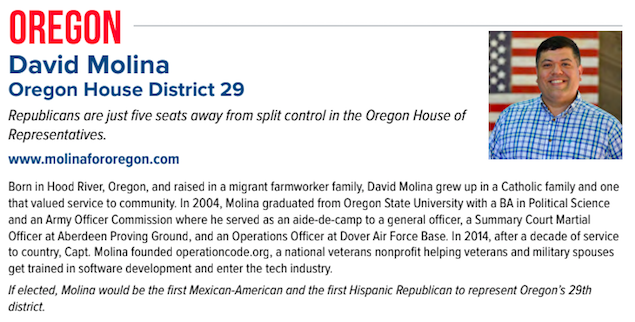 CORNELIUS Ore. - The Republican State Leadership Committee (RSLC) announced today that David Molina, candidate for House District 29, will be featured as a key candidate in their 18 in ‘18: Races to Watch - Hispanic Heritage Month Edition.”

According to former Governor of Puerto Rico and RSLC Board Member Luis Fortuño, “As a board member of the RSLC, I am incredibly proud of what the Future Majority Project has done to support Hispanic candidates who have made the decision to run for elected office and generously serve their fellow Americans. The 18 candidates featured in this edition of the “Races to Watch” list embody the emerging faces of the Republican Party and serve as a great example of the continuing contributions of the Hispanic-American community during Hispanic Heritage Month.”

RSLC’s “18 in ’18” lists include new and targeted candidates on the ballot this November for the first time, as well as, Republican elected officials who have already achieved electoral success and are in competitive re-election bids.

Comprised of the RSLC’s Future Majority Project (FMP) and Right Women, Right Now (RWRN) candidates of Hispanic heritage who are running for state-level offices around the country this year, these candidates are rising stars who will champion conservative policies while representing the full diversity of the nation. The RSLC’s FMP and RWRN initiatives both aim to identify, recruit, and support new diverse and women candidates at the state level.

"As the son of Mexican migrant farmworkers from the state of Nayarit, I'm incredibly honored to be included in this years "18 in '18: Races to Watch - Hispanic Heritage Month Edition. I look forward to championing conservative policies, from protecting the 2A to pro-life efforts, and lower taxes, while representing the amazing and beautiful diversity of our country."

To pitch in and help David’s campaign click here.

Oct 29, 2018 - I’m being asked by one too many people my opinion about candidates and measures from here to all over Oregon. Again, this is my opinion only a...

Letter to the Editor: David vs Goliath

Oct 29, 2018 - Letter to the Editor in support of David Molina, candidate for state representative district 29.